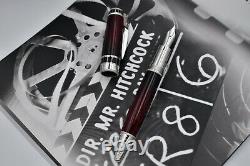 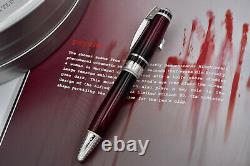 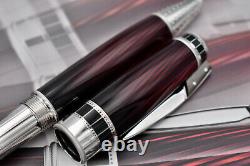 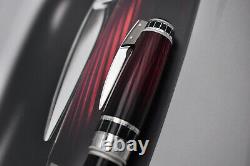 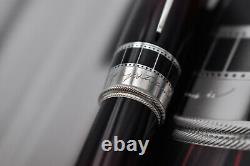 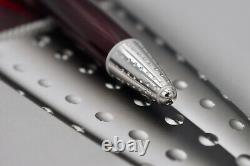 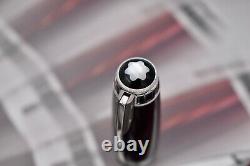 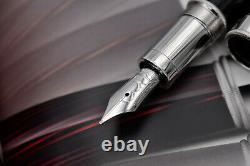 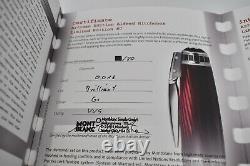 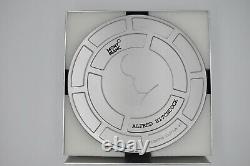 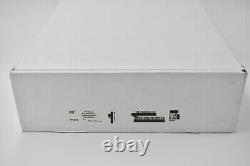 That story should never be banal. It must be dramatic and human. What is drama after all, but life with the dull bits cut out.

Alfred Hitchcock (1899 1980) interviewed by François Truffaut. Montblanc's tribute to Alfred Hitchcock, innovator of the thriller genre and the genius behind horror and suspense classics including "Psycho, " "The Birds, " "Vertigo, " and Rear Window. Alfred Hitchcock is considered by many to be one of the most influential filmmakers of all time and a true cultural icon.

The cap and barrel of this pen are crafted of swirling red and black precious lacquer echoing the dizzying effect that Hitchcock achieved in his 1958 classic "Vertigo". The knife-shaped clip on the cap is inspired by the shower scene in "Psycho". The cap ring is decorated to resemble a period film strip, and the 18K white gold captop, cap ring and endpiece are bordered with a rope motif, suggesting the murder weapon in the suspense classic "Rope". The accumulation of sly details amounts to a finish as satisfying as the denouement of one of Hitchcock's films. 18K gold nib engraved with Hitchcock's profile, size not indicated, appears Medium (M), has never been inked. It comes still with plastic film around the nib section. White outer box, inner illustrated box, metal film can style display box, pillow, booklet/International reply card (duly stamped). The shower scene from Psycho clearly demonstrates Hitchcocks phenomenal cinematic skill.

In 45 seconds that wrote film history, a woman is murdered in cold blod with a knife whose shadowy image remains emblazoned in the minds eye long after the screen goes dark. This murder weapon also play a key role in the design of the Alfred Hitchcock LE80, its sinister shape providing the inspiration for the pens iconic clip.

The pivotal scene in Hitchcocks Vertigo (1958) takes place on a staircase that winds up a tower. As the main character races frantically up the stairs in the pursuit of answers to the mystery surrounding him, he experiences a crippling bout of vertigo looking down, the stairs stretch away from him. Dizzyingly exaggerating the distance to the ground. In the style of the famous vertigo effect , invented by Hitchcock and used for the first time in this film (a disorientating, opposite camera zoom that seems to cause the ground to drop away from beneath the audiences feet), the cap and barrel of the limited edition 80 are made of precious lacquer with special effects (mixtures of reds and blacks and greys). The design is mainly influenced by the stairway effect from the movie Vertigo and elements from the movie The Rope. The knife shaped clip that dominates the cap is inspired by the shower scene from Psycho. Symbolising the craft that Hitchcock devoted his life to mastering, the cap ring is encircled by a stylised film reel and ennobled with his signature.

One of Hitchcock most famous pieces, The Rope (1948) Hs first colour film. Provides the inspiration for the ornamentation: a rope wound sinuously and suggestively around the fountain pens cap, barrel and cone.

A cameo self portrait of the great genius of the thriller genre is engraved in the handcrafted, rhodium-plated 18k gold nib. 18k - 750 solid white gold fittings. Cap and barrel made in intense red precious lacquer. Clip set with diamonds: 0.016 carats, brilliant cut, G+ colour, VVS clarity. 750 rhodium plated 18K 750 gold nib. The limitation of 80 pieces honours his lifetime. Alfred Hitchcock lived to be 80 years old and never stopped creating films. From a Collectors point of view the Great Characters Line is one of the most enjoyable Category. GC line is increasing its popularity year after year.

Many top MB Collectors decided to invest on this specific series (both regular and Artisan) making it the nerve centre of their Collection. The concerned pen comes in mint, unused and not inked condition.

All original boxes and papers are included. We use only high quality materials such as double wall cardboard boxes, extra large buble wrap, polypropylene packaging tape, pvc pipe with high resistance. The attached photographs are to be considered part of the description. We are at your disposal for any further information.

We usually reply messages within the same day, but please allow do bear in mind that our time zone differences might cause a slight delay. The item "MONTBLANC 2011 Great Characters Alfred Hitchcock Artisan Limited Edition 80" is in sale since Sunday, March 1, 2020.

This item is in the category "Collectibles\Pens & Writing Instruments\Pens\Fountain Pens\Montblanc". The seller is "erfobay" and is located in Paris. This item can be shipped worldwide.