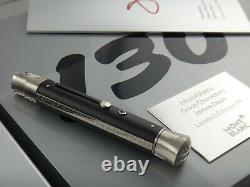 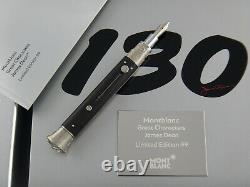 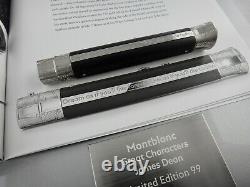 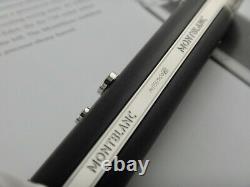 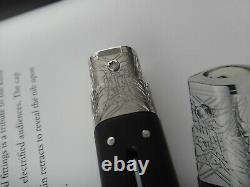 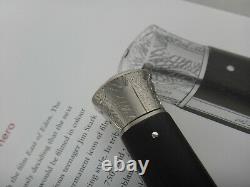 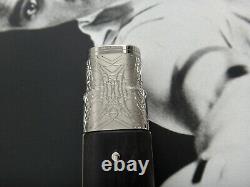 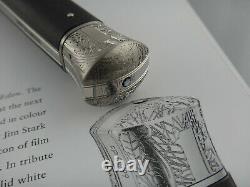 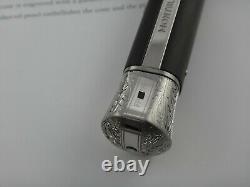 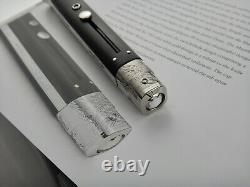 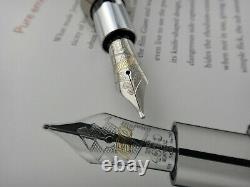 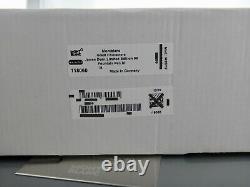 MONTBLANC Great Characters James Dean Artisan Limited Edition 99 Fountain Pen M. Dream as if youll live forever. Live as if youll die today. James Byron Dean (1931 1955) was an American actor and a cultural icon of teenage disillusionment and social estrangement One of the greatest film stars of his time, James Dean captured peoples attention through his short, yet highly impactful career in Hollywood.

His most notable roles include East of Eden, Rebel without a Cause, and Giant. The pen comes in as new condition (never used, never inked, mint). All original boxes and papers are included. From a Collectors point of view the Great Characters Line is one of the most enjoyable Category. GC line is increasing its popularity year after year.

Many top MB Collectors decided to invest on this specific series (both regular and Artisan) making it the nerve centre of their Collection. After just three major films, James Dean reached immortality. He was one of the greatest big-screen stars of his time, remembered for his leading roles in the films East of Eden, Rebel without a Cause, and Giant. Though he never won an Oscar during his short, meteoric rise in Hollywood, he was nominated posthumosly for an Oscar for two of his starring performances. With the MONTBLANC Great Characters James Dean Limited Edition 99 Fountain Pen, Montblanc honours the legendary Hollywood star the young rebel who won his place in cinematic history in just a year and a half.

James Deans career began in 1954, after he had already auditioned in Hollywood many times without success. To get a foothold in the film business, he took a detour via the stage. Any knowledge he lacked he picked up at the famous Actors Studio in New York under Lee Strasberg.

It was here that the director Elia Kazan discovered him and immediately engaged him for screen tests. People were looking for fresh faces for a new, revolutionary character that would turn the film world upside down.

There was no one better for this than James Dean. The MONTBLANC Great Characters James Dean Limited Edition 99 Fountain Pen features meaningful design details dedicated to the charismatic actor. The knife-shaped design of the writing instrument is a tribute to the knife fight from his second film Rebel without a Cause. The pens barrel is crafted from precious ebony with fittings made of Au 750 solid white gold, giving it the appearance of a closed switchblade. The cap top adorned with the Montblanc emblem in resin retracts to reveal the nib upon activation of a special switchblade mechanism. James Dean won his first Hollywood contract with the film East of Eden. The success of this film led to Warner Brothers spontaneously deciding that the next James Dean film, originally planned in black and white, would be filmed in colour and more elaborately. With James Deans role as the rebellious teenager Jim Stark in his second film, Rebel without a Cause, he became a permanent icon of film history, moving audiences with his emotionally revealing acting style.

In tribute to the legendary scene from his first film East of Eden, the Au 750 solid white gold cone is engraved with a pattern from a dollar bill. The Montblanc emblem in mother-of-pearl embellishes the cone and the precious ebony barrel. Pure emotion in front of and behind the camera.

What made James Dean stand apart from many actors of his time was the authenticity of his acting. He didnt just play a role, he fused with the character.

Dean often heated up the atmosphere behind the curtains to prepare emotionally for a scene of conflict in the screenplay. The constant provocation made his relationship with his producers complicated, but regardless, he was given the starring role in the film Giant and he wascontracted for a further nine films. James Dean wouldnt even live to see the premiere of Giant, making his legacy all the more tragic. A special mechanism hides the rhodium-coated Au 750 solid gold nib within the writing instrument when not in use, giving it the look of a closed switchblade.

When opened with a simple flick, the retractable nib automatically extends into position, ready for writing. As the cool, unapproachable and sensitive rebel he embodied not only in his films but also personality, James Dean became a figurehead for the wild youth of puritan America in the 1950s. The sensitive and shy actor, who expressed teenage anger in his films, loved fast cars. Before his career as an actor, he dreamed of being a Grand Prix driver.

It was in his Porsche 550 spyder, the car he called Little Bastard this nickname originated on the set of. Giant that James Dean met an early death. On 30 September 1955, he died in a car accident at only 24. His enthusiasm for motorcars was part of this fascination with speed.

His passion for motor racing served as inspiration for the fine engraving of a race flag on the handcrafted rhodium-coated Au 750 gold nib. One of his most famous quotes is engraved along the side of the barrel summing up his fearless attitude to life : Dream as if youll live forever. We fully support the idea that luxury must be comfortable so, for this kind of product (Montblanc Artisan Edition), we offer a worldwide.

We use only high quality materials such as double wall cardboard boxes, extra large buble wrap, polypropylene packaging tape, pvc pipe with high resistance. The attached photographs are to be considered part of the description. We are at your disposal for any further information. We usually reply messages within the same day, but please allow do bear in mind that our time zone differences might cause a slight delay.

The item "MONTBLANC 2018 Great Characters James Dean Artisan Limited Edition 99" is in sale since Sunday, March 1, 2020. This item is in the category "Collectibles\Pens & Writing Instruments\Pens\Fountain Pens\Montblanc". The seller is "erfobay" and is located in Paris. This item can be shipped worldwide.